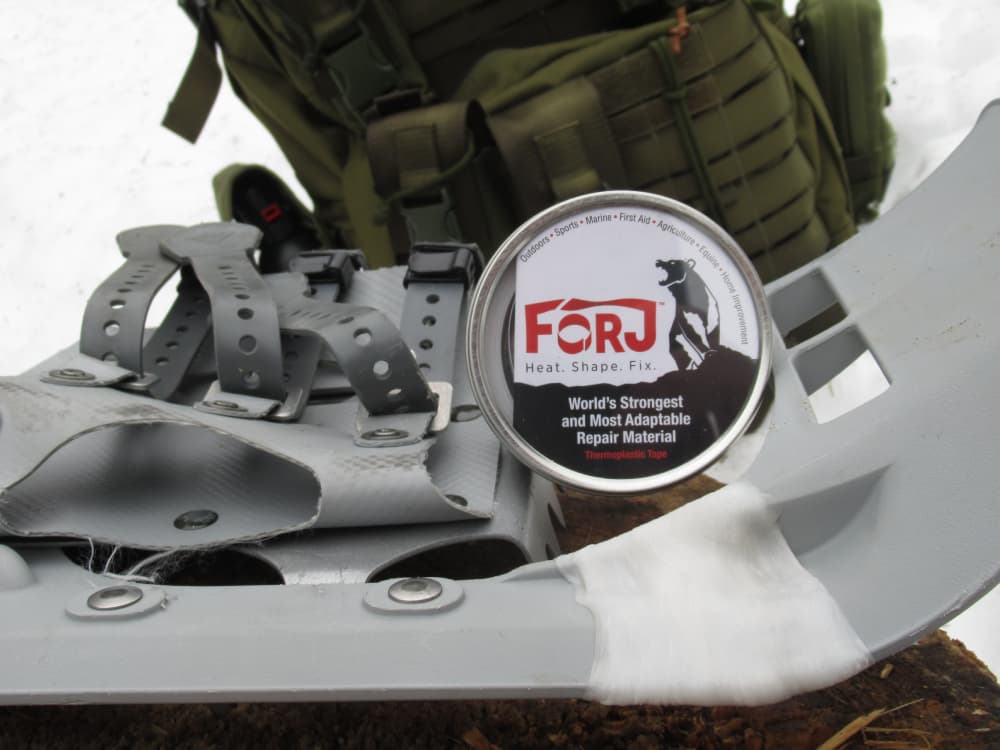 FORJ thermoplastic tape to the rescue for my cracked snowshoe.

Sometimes you come across an item that's pretty interesting, especially if it relates to your ability to do field repairs during adventurous trips in remote environments. You are quite dependent on your means of transportation to safely get in and out, so a good risk assessment plan better include some solid improvisational skills, spare items or an outdoor repair kit adequate for your needs. When I broke one of my beloved snowshoes on a winter trip in Algonquin Park several years back, we had packed a spare set of snowshoes so we could continue our journey. Although I looked at ordering spare parts or replacing them altogether, I just ended up keeping the snowshoe together with snare wire. 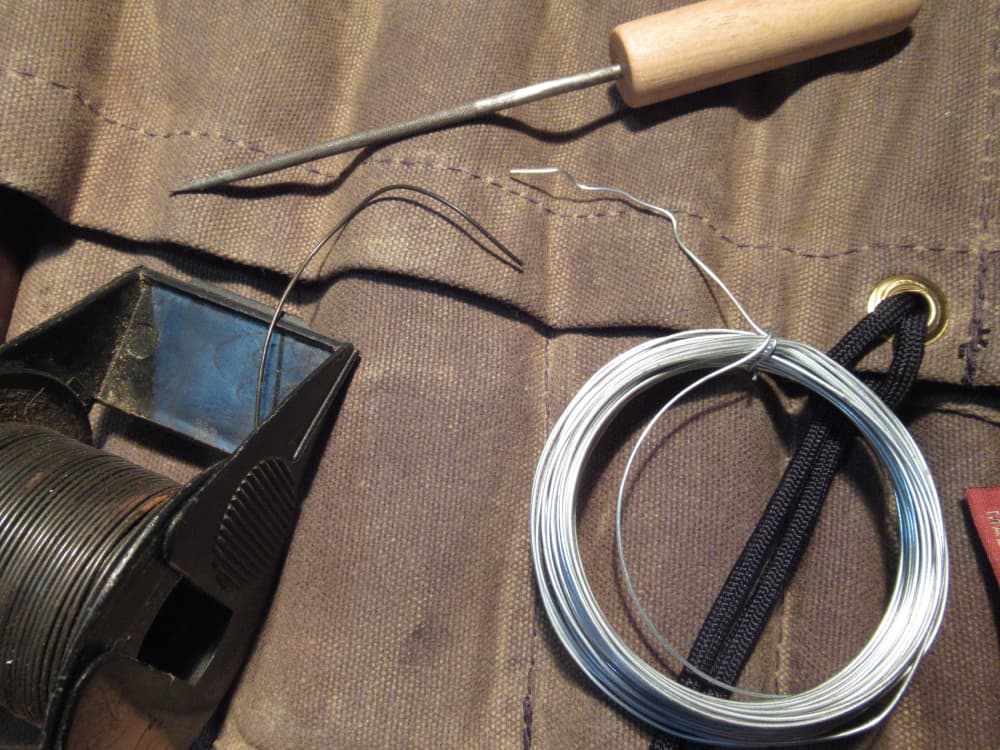 After watching several adventure gear repair video's on You Tube, I got inspired to upgrade my own field repair kit and include a stronger, more dependable and adaptable solution for equipment failures relating to one's mobility and means of transportation in the outdoors. After some research and facts finding online, enter the FORJ Repair Tape. This is a thermoplastic repair tape with a wide range of applications that I ended up getting a sample sent to me by Tim from the Canadian Outdoor Equipment Company to try out. 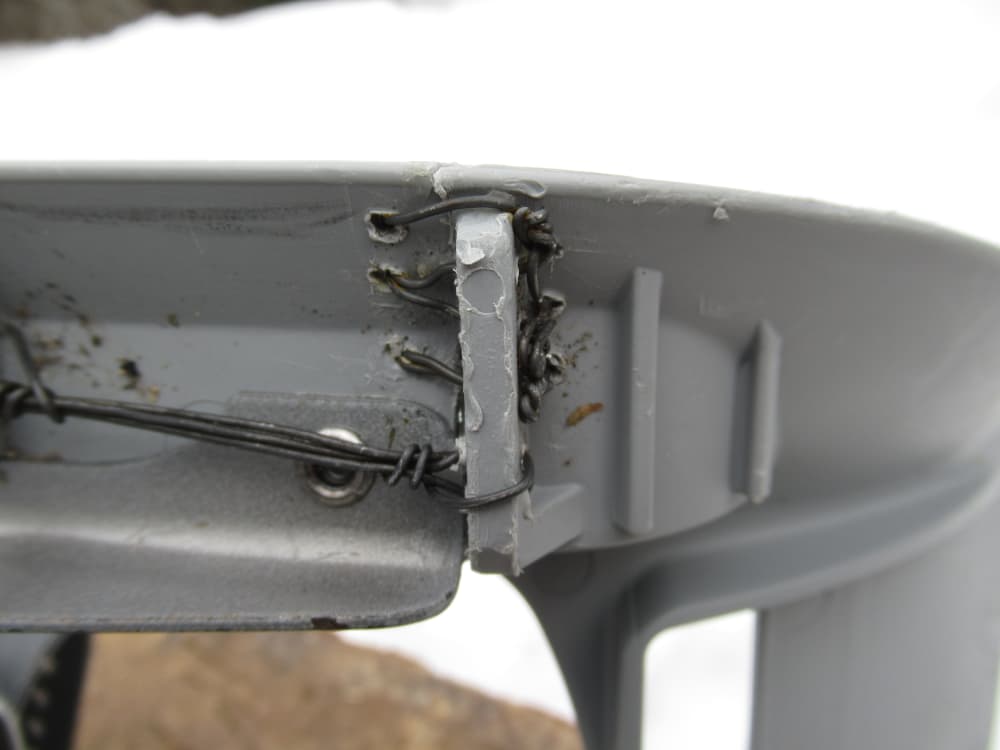 'Drilling' additional holes with the pointed end of a round file and weaving in the steel wire after cutting out the less robust snare wire.

As a first project, I wanted to upgrade the snare wire fix on my snowshoes, aiming for a more permanent, longer lasting and much stronger repair while using my standard wilderness travel gear to simulate a true field repair. 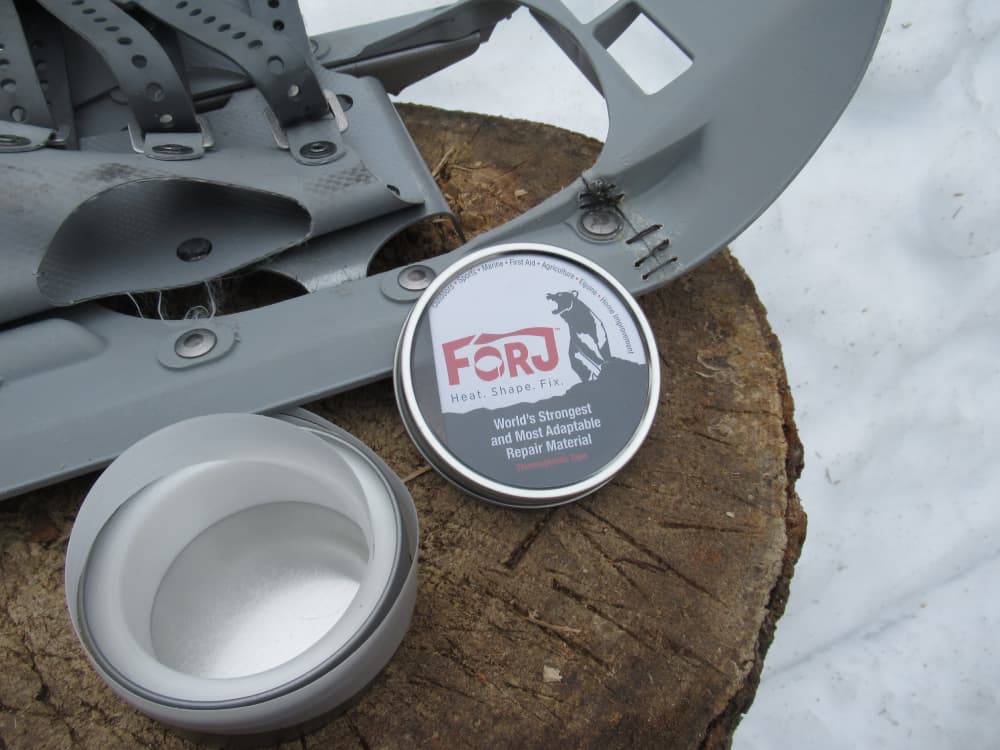 Ready to apply the FORJ tape.

I've used a stronger wire then the previously used snare wire, two separate lengths of about 2 feet of the FORJ tape and 1 liter of boiling water. When the hot water was poured on, the tape became clear, sticky and really malleable, which resulted in a very good and tight fit around the irregular contour of the break. 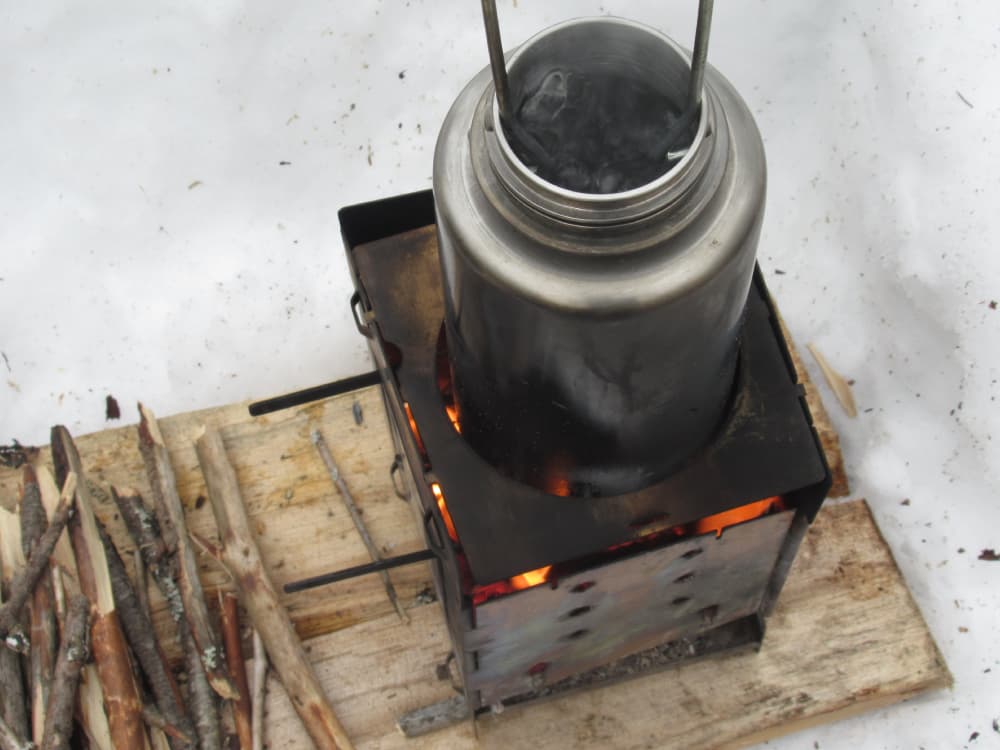 Boiling a litre of water in a Stainless Steel Nalgene bottle on my Firebox stove. 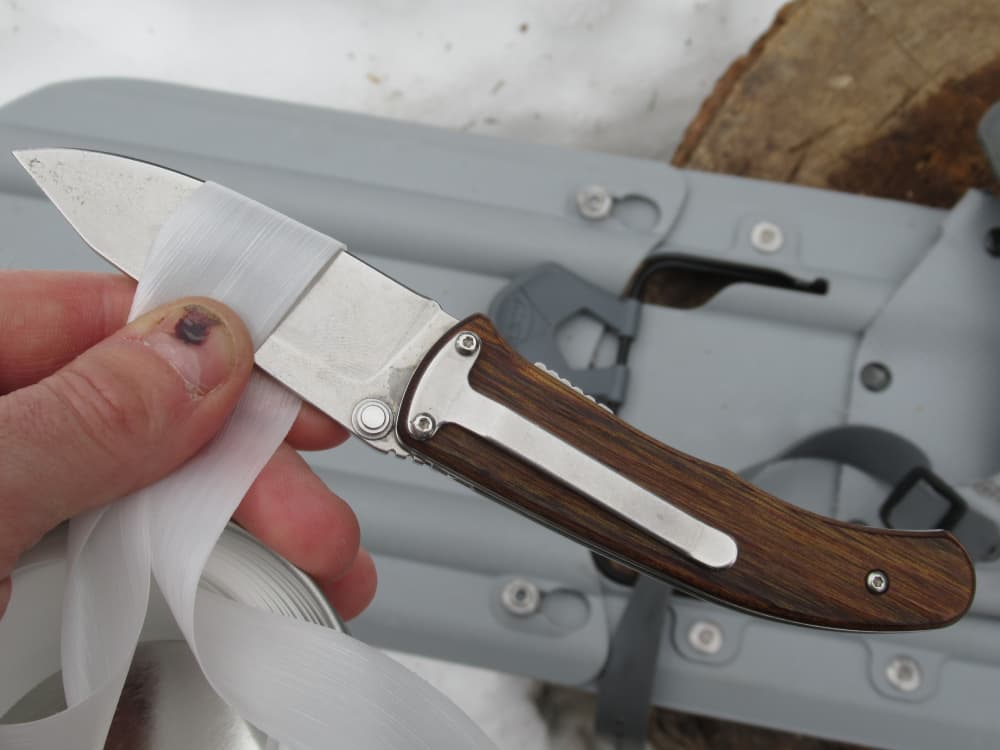 Cutting the 2 lengths with a pocket knife. 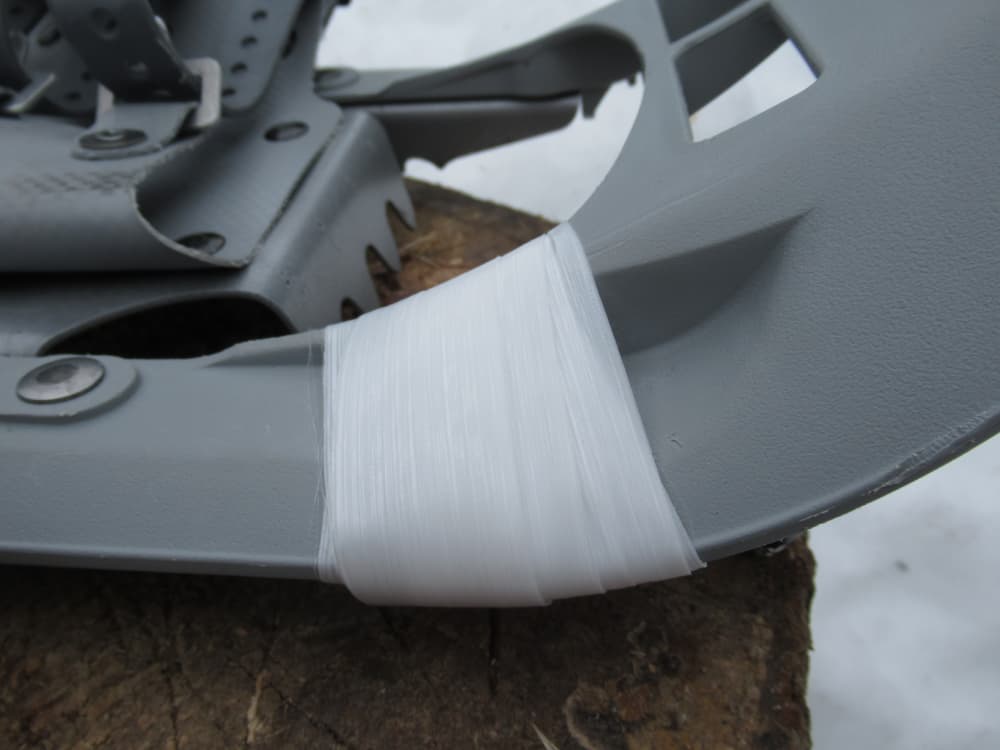 Tightly wrapping the first length around the break. 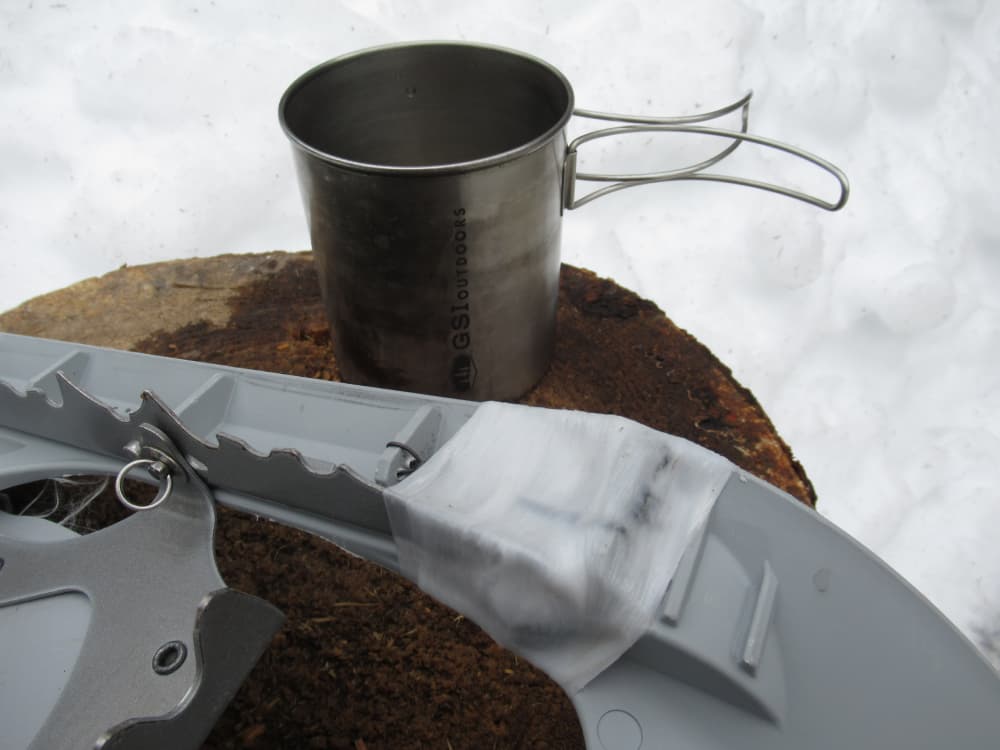 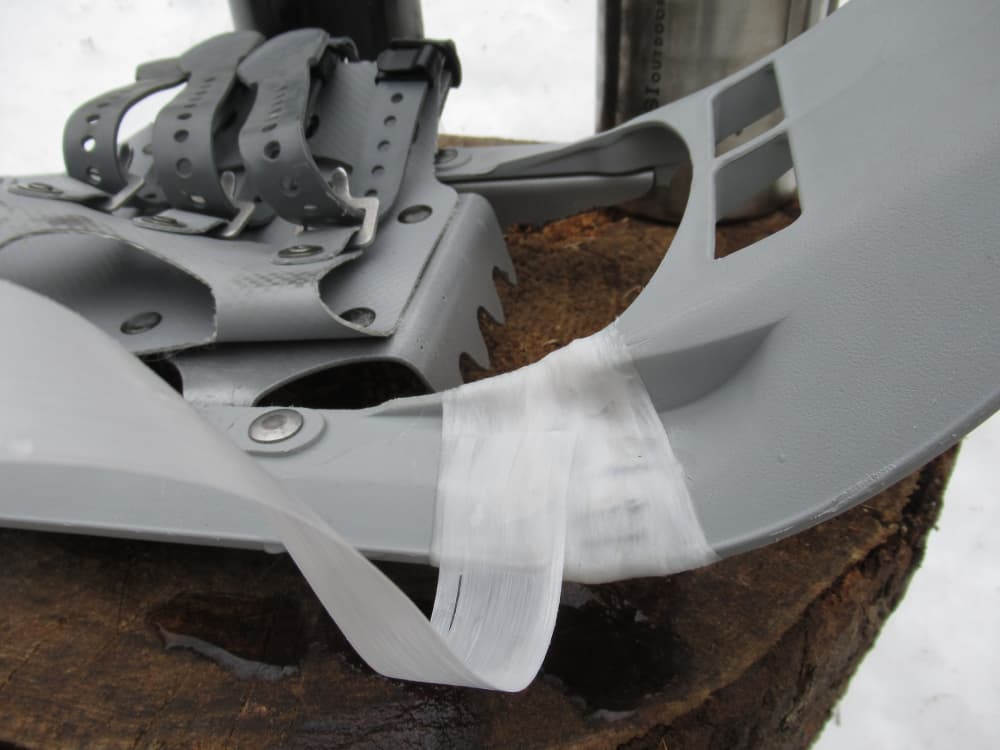 Pouring some hot water on the second length to make it stick to the previous one, making it easier to tightly wrap it over the first length.

Once it cooled down, it became rock hard and got rid of any play the snare wire fix used to have on its own. Because of its malleability when warm, it can be made into, or formed around, almost any shape or object. I think that's fantastic quality with a very multi purposed range of use, making it a very suitable addition to an outdoor repair kit. Several hours of bush use later and I'm really pleased with the result which is holding up nicely so far. 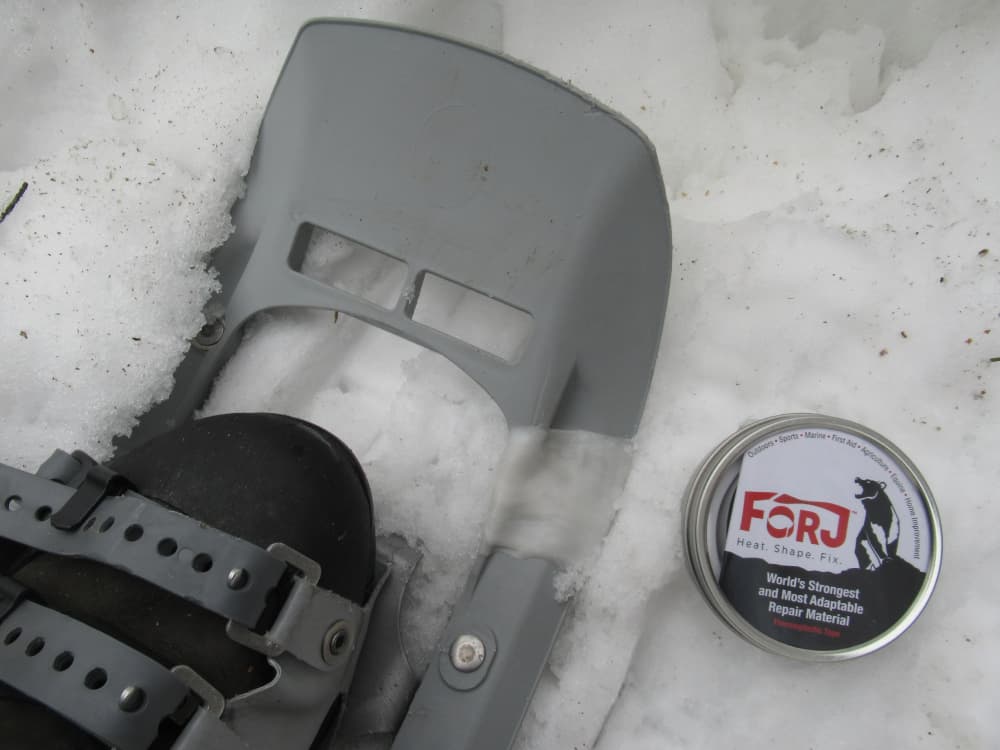 On the trail, huge improvement with a very solid fit and feel.

For a second project, I thought it would be a great idea to take a look at possible field repairs while out canoeing. During my time working in the interior of Algonquin, we usually found one or two broken canoe paddles per season. Most of those had a broken shaft, only once did I come across a paddle with a broken blade. Broken paddles are generally the result of carelessness and this primarily happens when they are used to maneuver a loaded canoe when its not or only partially floating.

Less experienced canoeists, using their paddles to push the boat in an effort to try and keep their feet dry in shallow water or when crossing a beaver dam, may one day end up with two pieces instead of one paddle. Usually people have a spare and the situation is more an inconvenience than anything else. However, imagine you had to improvise or repair the broken paddle so it can be used again or kept as a spare for the rest of the trip. Maybe that broken paddle is the only one you got and you either carve another one or improvise and repair the one that broke. 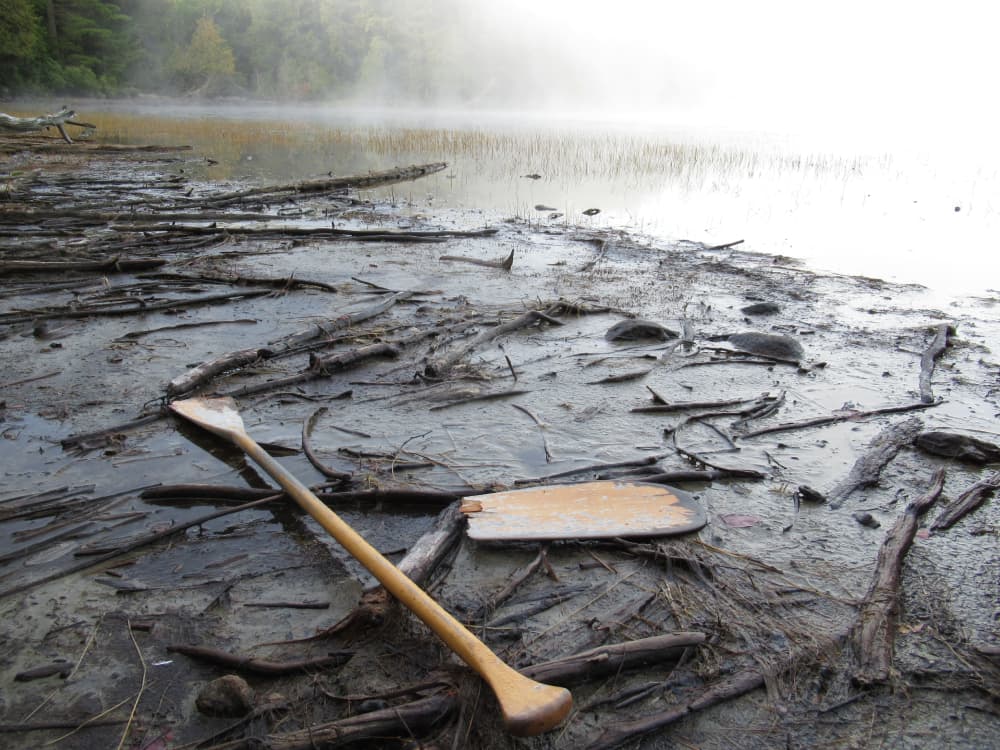 A bit of an issue if you are not prepared to solve this problem.

I had an old and already damaged paddle available and decided to give it a try, using the remaining FORJ tape to repair a simulated break. Since the majority of paddles I've seen before had the shaft break in half after applying downward force, the old paddle was subjected to such until it snapped. This paddle broke in a more linear way, enabling us to put it back together without the need to cut and carve additional support pieces to increase stability in case of a more radial break. 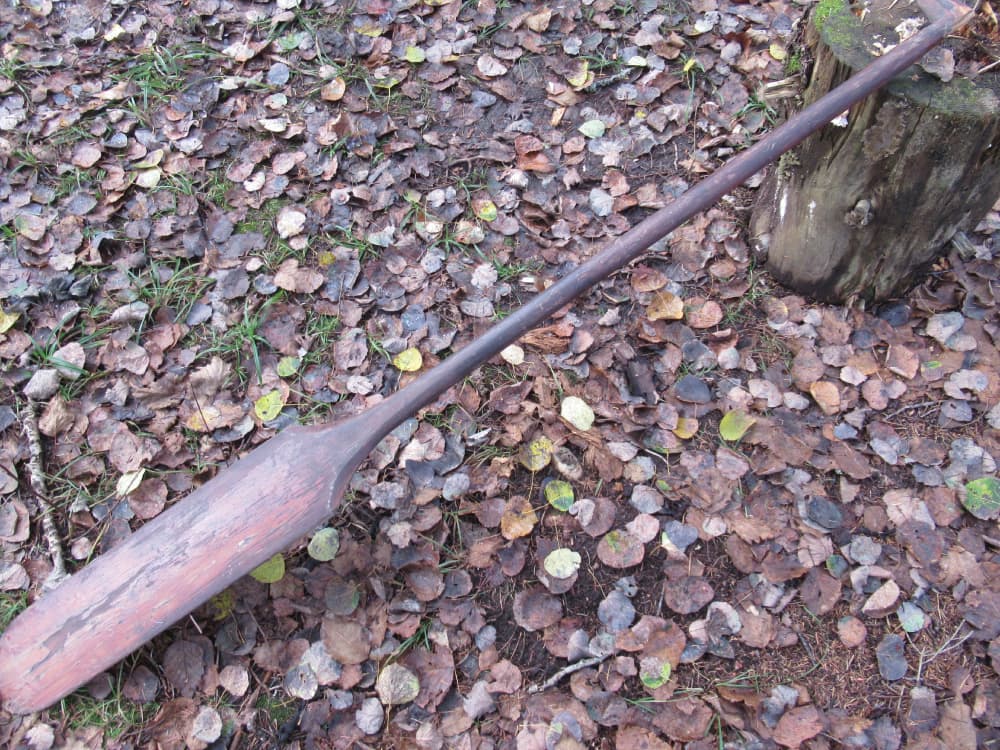 The test paddle before downward force was applied. 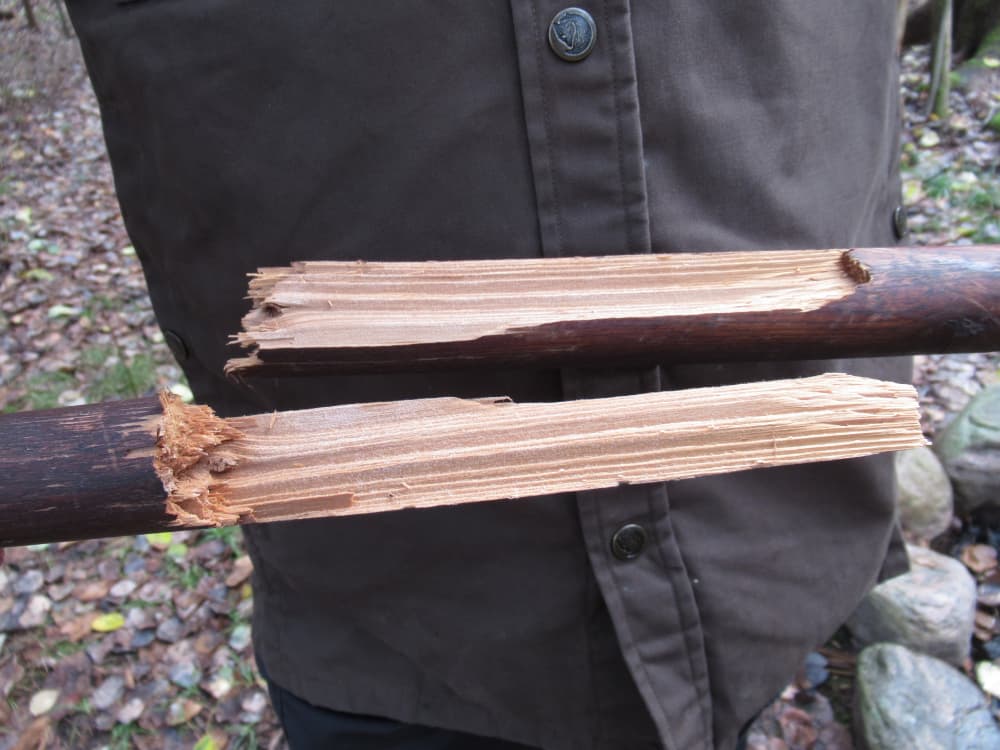 Close-up of the way the paddle broke.

As with the snowshoe, I simulated a field repair using equipment I have at my disposal while travelling outdoors. For canoe trips this involves a billy pot to boil water and prep food, in combination with a stainless steel Nalgene bottle and a GSI nesting cup. After splitting some wood, a fire was made to bring the water to a boil. 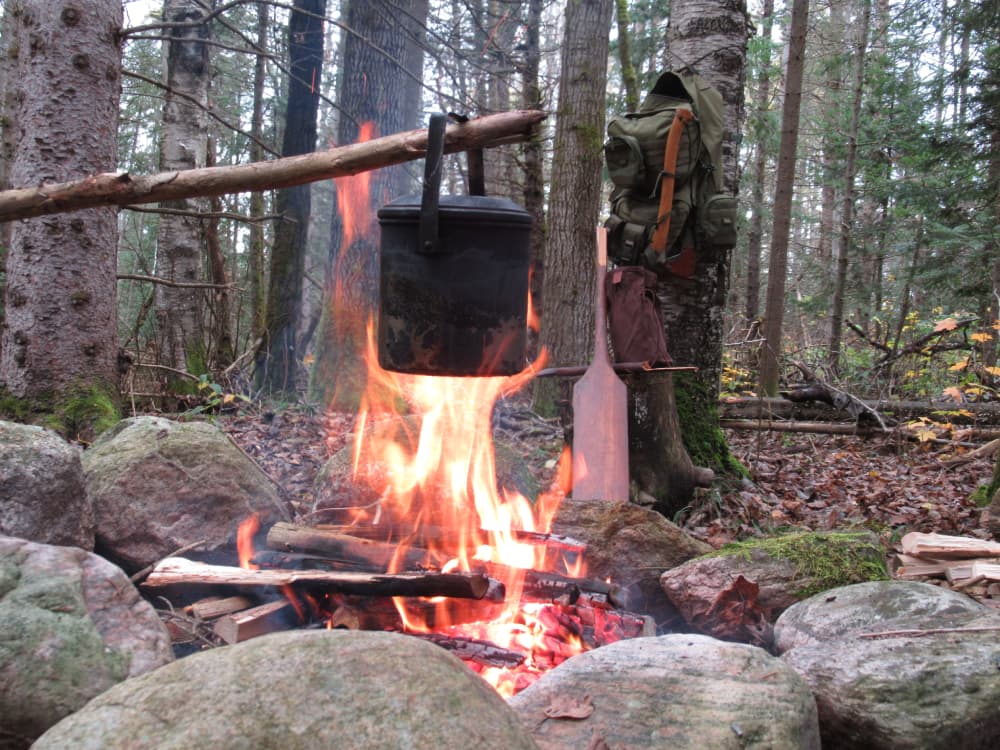 Start of the repair process by boiling a billy pot of water. 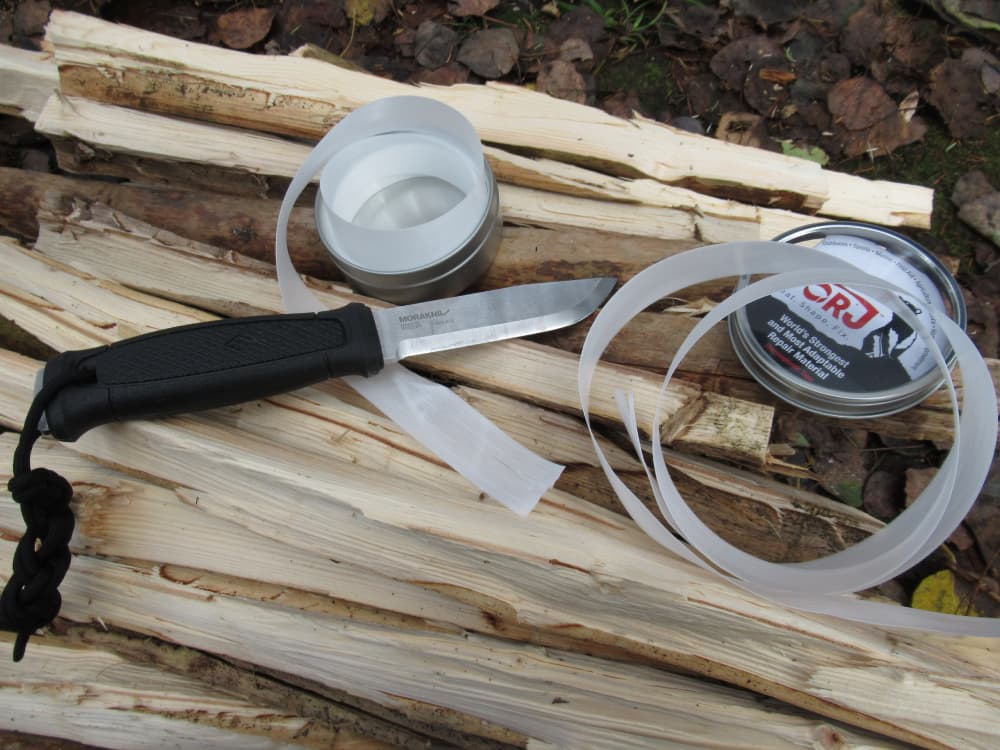 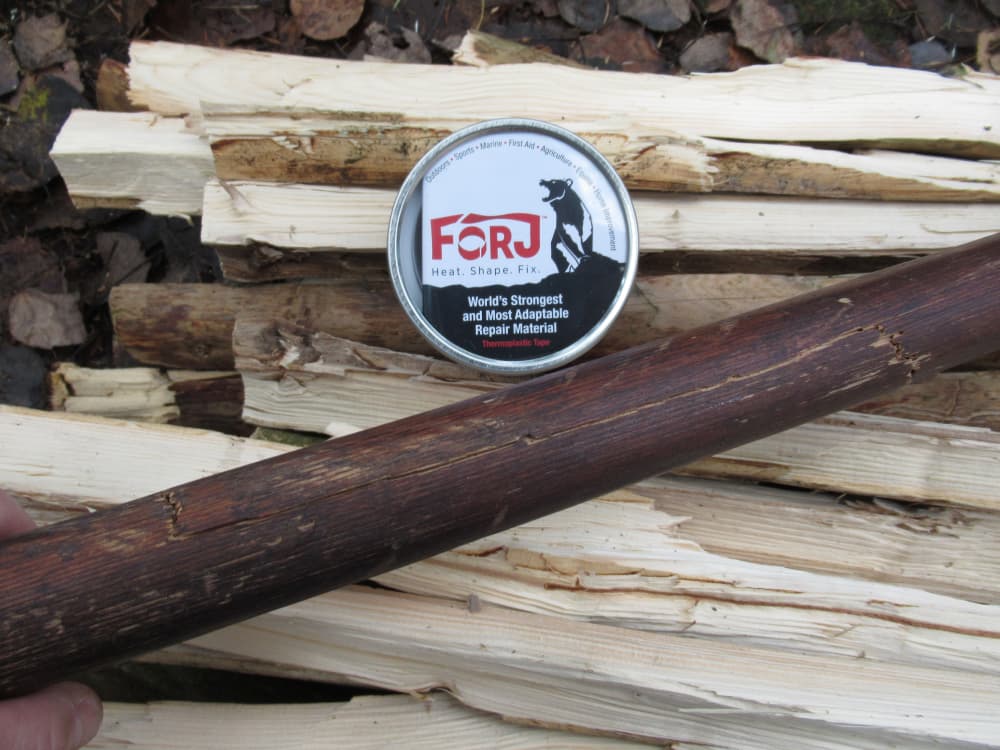 Lining up the 2 pieces of the paddle shaft in preparation for its repair. 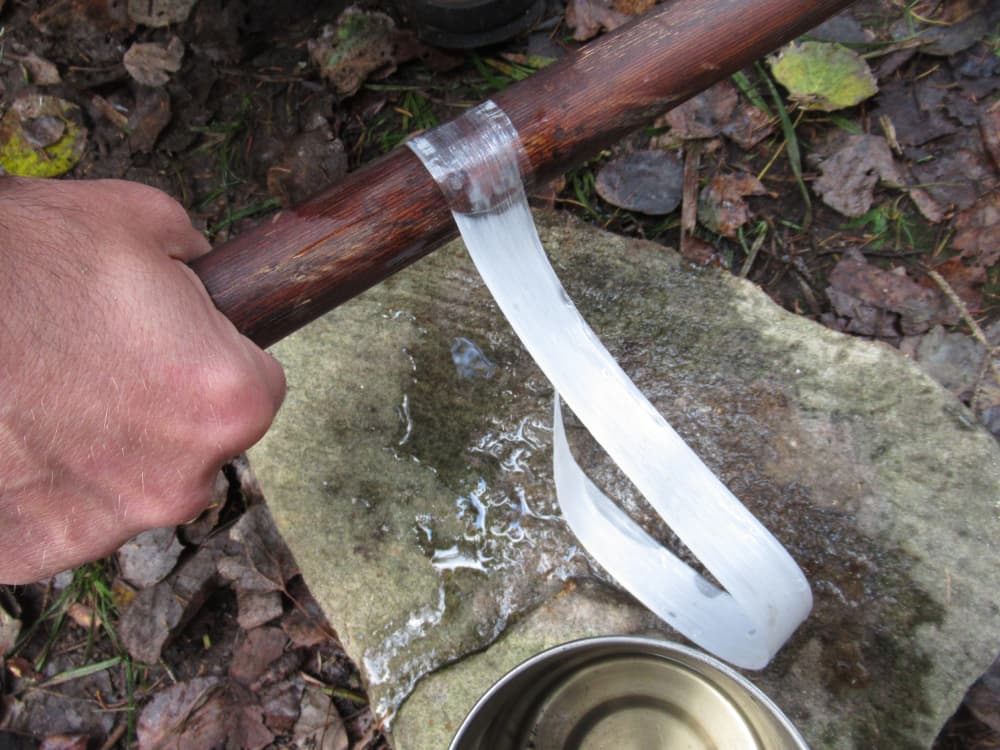 Wrapping the first length of FORJ tape and pouring hot water as we go.

Using my GSI cup for increased control, I gradually poured hot water onto the 'working end' of the repair tape while my friend slowly rotated the paddle shaft. This provided us with the opportunity to keep the 'standing end' of the tape under tension. This approach resulted in a very tight and secure fit around the break. 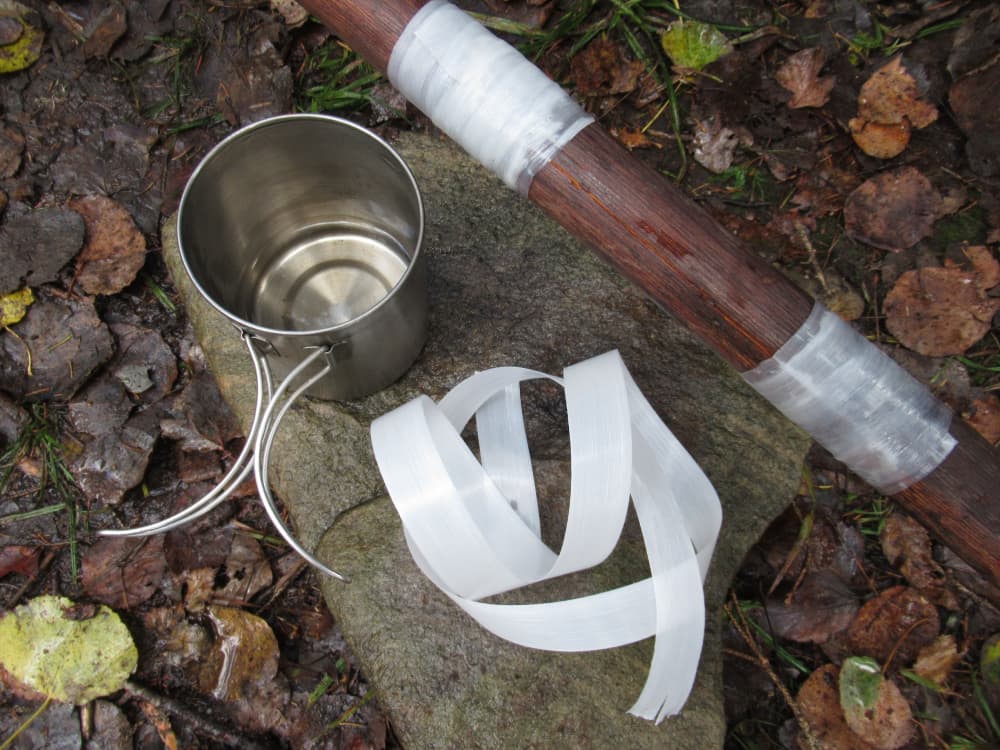 Both break spots wrapped and securely held in place before covering the whole area with the third length of FORJ repair tape. 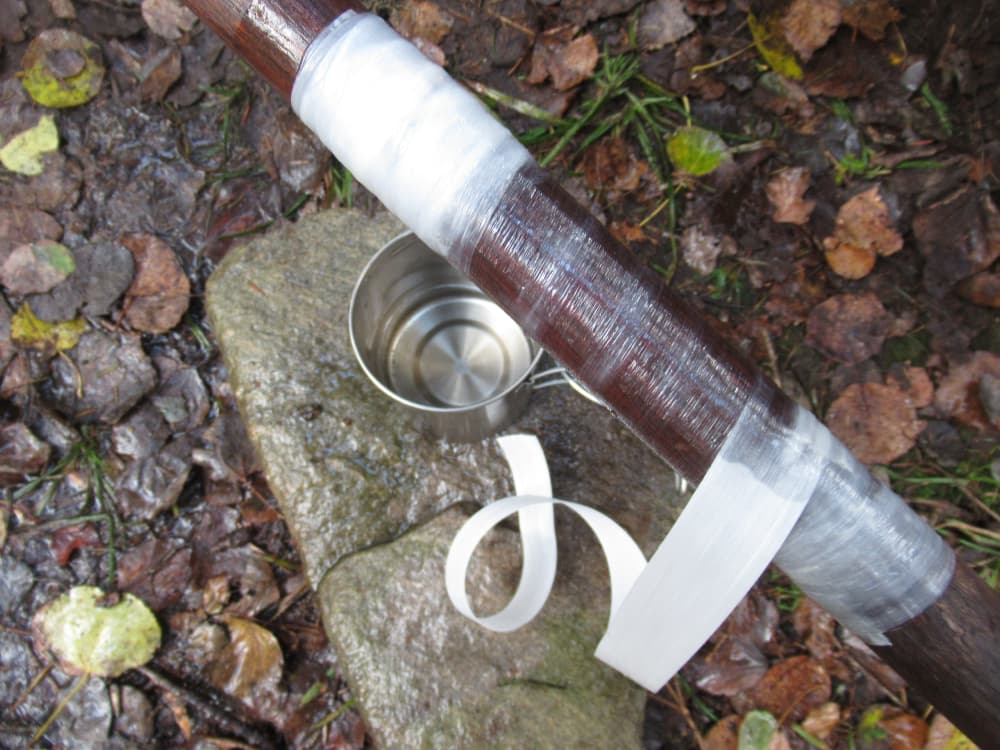 In the process of tightly wrapping the whole area of the break. 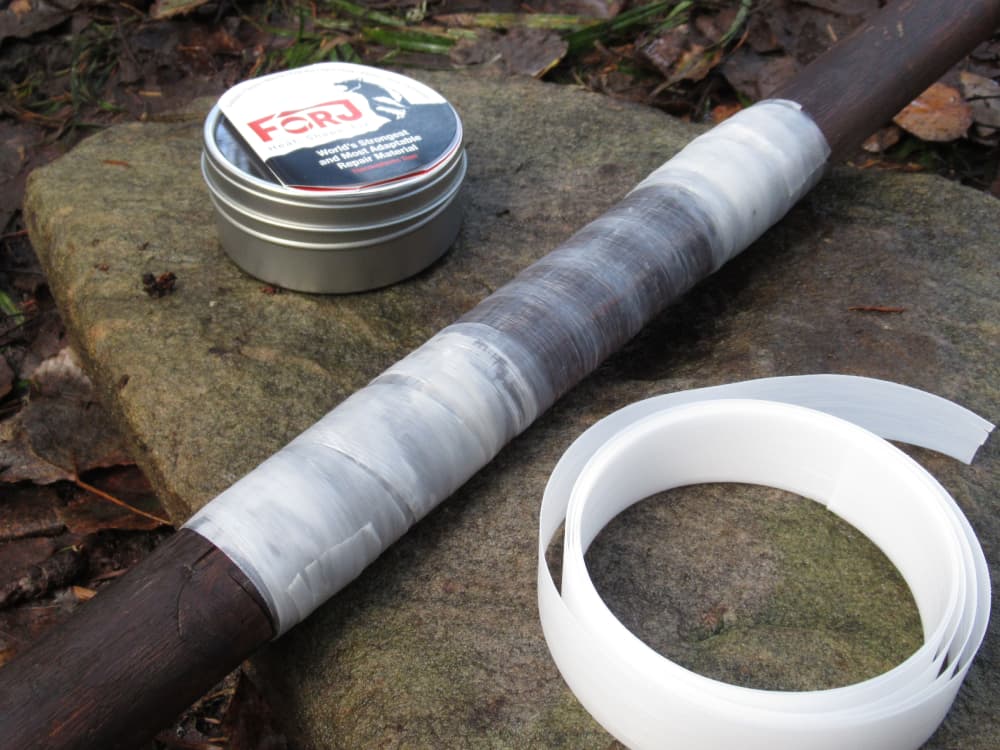 The last length of thermoplastic repair tape ready to be put on. 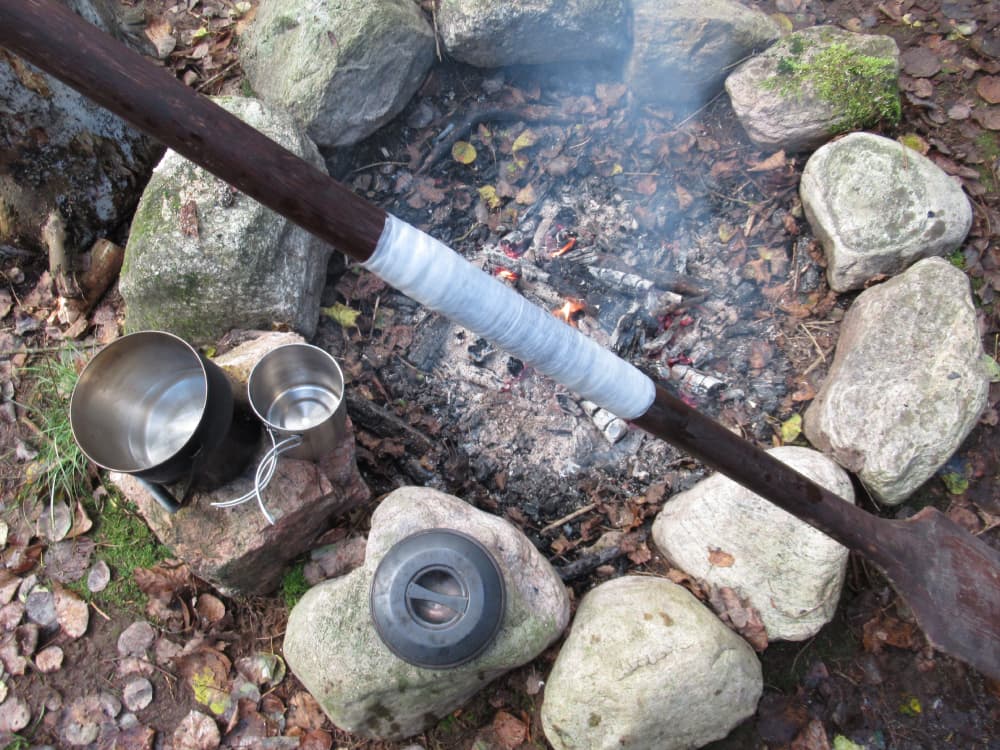 Allowing the tape to dry and harden up before taking the paddle to the water. 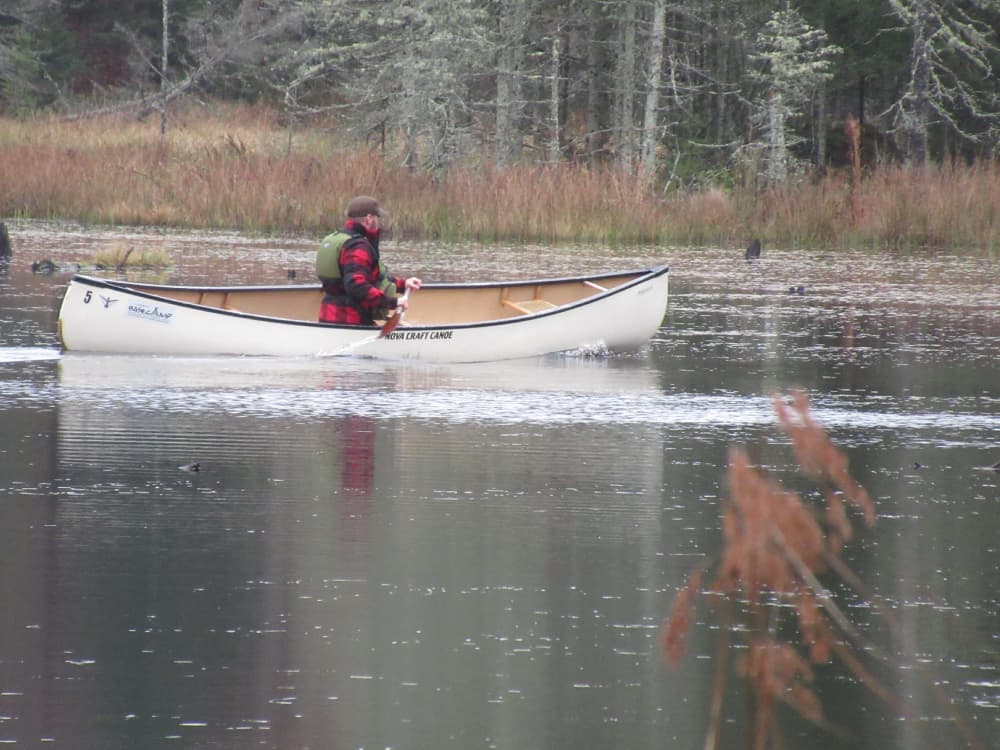 Gaining some speed and momentum with more intense paddle stokes to test the integrity and strength of the paddle after repair.

Having put the repaired paddle to work on the water, I must say it held up pretty good for such a very simple repair. We basically just broke the paddle in half, lined the two pieces back up and then wrapped some thermoplastic repair tape around it. Depending on the content of a canoe adventure repair kit, with regards to broken paddles and the nature of the actual fracture, one could also use metal wire and maybe a couple of small screws. This would increase the rigidity and sturdiness of such a repair, prior to applying FORJ tape, or even a strong adhesive tape.

However, for the purpose of testing the capabilities of this FORJ repair tape, it was the only thing we used and the paddle easily returned to a functioning state without the need for specific tools or more resources. Even if the paddle shaft would have fractured cleanly in half, a knife and saw could easily produce several wooden rods which would be placed parallel to the shaft before and during the application of the repair tape, in an effort to stabilize the fracture. I haven't personally tried to fix such a paddle break but I think it would produce a workable product. 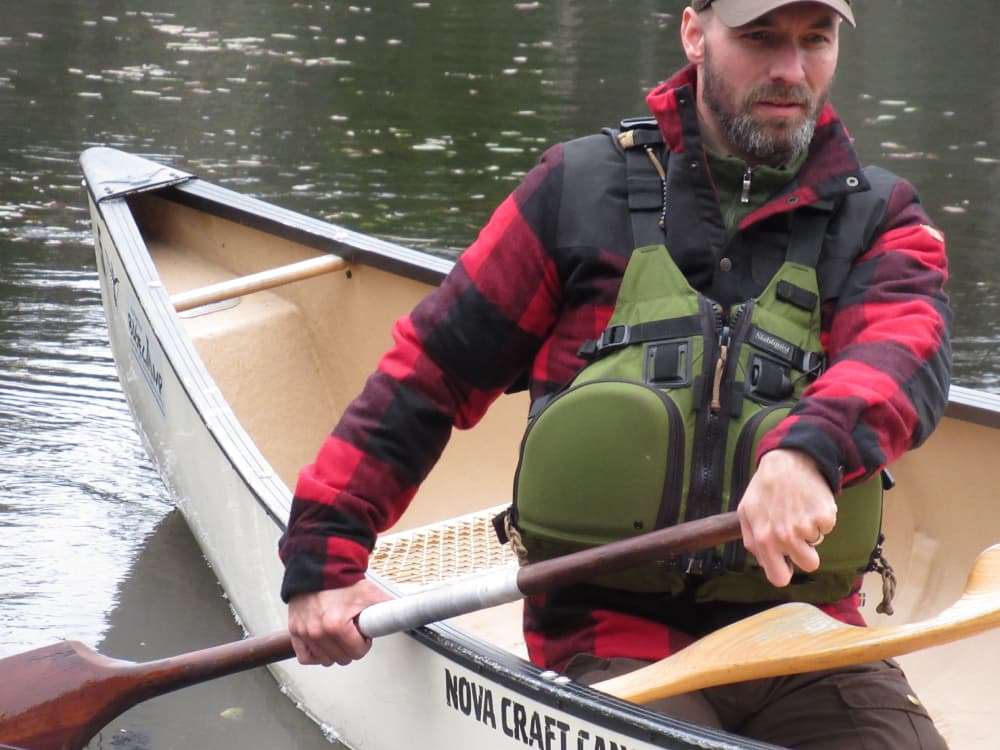 What makes the FORJ repair tape interesting to me is the fact that it's a thermoplastic. When heated, it becomes soft, sticky and easily pliable into any shape, both regular or irregular in nature. When it cools, it sets rock hard, keeping that shape and stabilizing or minimizing any movement of underlying parts. A simple and straight forward repair option offering great strength with a versatile field of applications.

In a way, you could compare this repaired paddle to the spare tire in a car; you should use it with extra care, don't push it to its limits and change it out again at the earliest opportunity but, it will get you home safely.

Peter grew up in Belgium and moved to Ontario in 2011, where he became a Park Warden in the interior of Algonquin Park. Having a keen interest in outdoor adventure from a young age, he attended numerous courses and programs, allowing him to safely hike, climb, canoe and undertake winter expeditions in Europe’s wild places. His hunger for knowledge led him to become a certified survival instructor in his mid-twenties and more recently, he started his own outdoor school. Peter knows what he knows and enthusiastically shares this, knowing he too will forever be a student of nature. 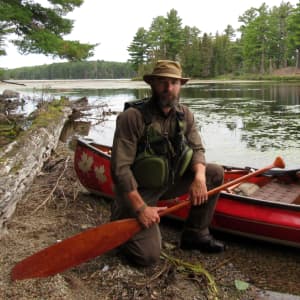